Watch the fangirly nerd as she fangirls and acts nerdy!

Oh hey! This is going to be pretty short, ’cause I have to go walk me some dogs and then go to drama class, where I’ll probably fight until my muscles cry and bleed. But that’s okay. I love theater class. It just makes my weak, unexcersised muscles screeeaaam.

Anyway, first off, The Bloggess was giving out awards for various things today, and I decided to award myself this one: 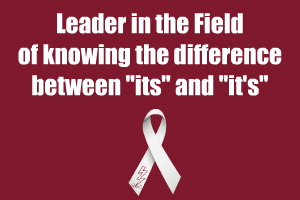 Secondly, Kim gave us an assignment today to write insult poems. I only have one so far, and it’s complaining about spammers. You know, in your e-mail. This will probably be ridiculously embarrassing, but that’s cool with me. Also, I tried to space it better, but WordPress has major issues sometimes. It starts at “I do not want a penis enlargement” and ends at “At least I know I am!” On second thought, I’ll just put it all in italics.

And if you ask me one more time, I’ll kick you in the crotch.

Don’t want my man-junk to be bigger

Or that I think it’s wrong

It’s just that I’m quite against spam

And I don’t care if my penis is long.

And if you use my name again

In the subject line

I swear to God, I swear I’ll do it

I know I’m not the only one

Who hates your stupid spam

Everyone I know is done

At least I know I am!

Ohhhh goodness. That was fun!

Unawesome: I’m so out of shape my gusts will probably burst out all over Barbara’s dogs, but that’s okay, ’cause it’s fun, and Barbara just had hip replacements. The lady seriously needs some dog walking help.

P.S. We just got a call from New Jersey and then British Columbia. Um?

So, this blog is about my strange pets. Lexie is my awesome cat, and Brandon is my fabulous rabbit. And speaking of Brandon, he’s kind of a hermaphrodite. No. Not really. But we’re unaware as to whether he’s male or female. I know. That’s kinda weird. But it only gets weirder….

One morning, Mum woke up and Lexie was licking her…… EYE. e-y-e, the part of your body you see with.  Another morning, she woke up and I kid you not, Lexie’s butthole was INCHES from her face. That’s happened to me before, too. 😀

One morning, Mum woke up and was staggering through the house, blind (without her glasses) and Lexie runs up and jumps up to her butt and claws it. 🙂

Frequently, we let Brandon hop around in the living room, and we build him a little blanket fort out of a stool (like a thing you sit on, not like poop) and a blanket, and he hides in it. Well, Lexie, it turns out, loves the blanket fort too, so she scares Brandon away and then sits there inside the fort, purrrring away. 😀

When we bring Brandon up, we set some lettuce and cabbage and stuff on the floor for him to eat. When he doesn’t eat it, Lexie goes over to the greens and I. kid. you. not. she. starts. eating. the. veggies. yes. cat. eating. veggies. So. Freaking. Adorable. 🙂 Then, when Brandon starts eating them, she pounces and makes him stop eating…. or she tries, anyway…. 🙂

Sometimes, Lexie goes up to hard surfaces and starts seizing. Okay. Not totally. But her tail just starts shaking and freakin’ out and it’s so funny! I wonder if she can be diagnosed with, like, tail-epilepsy or something. Not that epilepsy is funny, but your cat’s tail…. shaking… randomly? It’s so weird! 😀

Oh, how I love them!

So, I was thinking… what should I blog about?  I’m goink to talk like zis for ze rest of zis blog post, dahlink. Dis is extremely amusink. I am ‘aving bucketloads of fun. You should really try zis zomeday! And now I vill be givink somethink to amuse you minds…..